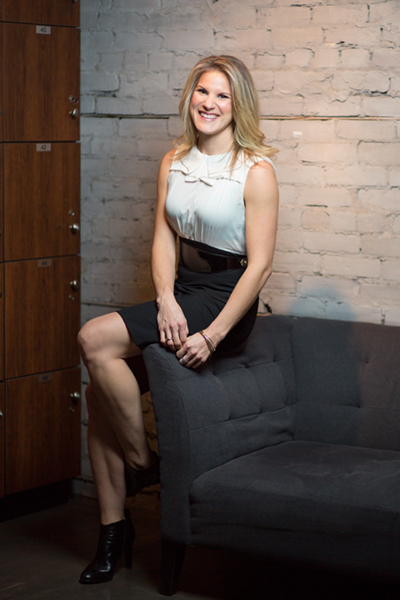 Growing up, I always wanted to be a cheerleader...

In fact, it was one of the determining factors when choosing which university to attend. But when I got into a very reputable & competitive theatre school, even though it didn’t have a cheerleading squad, I had to say yes. I mean, even bigger than my desire to be a cheerleader was my dream to be on Broadway.

Well, I never did see my name in shining lights or make the Rockettes kick line. I never even got to wear one of those tiny cheerleading outfits (thank goodness!) But you don’t have to wave pom poms professionally in order to be a cheerleader.

My biggest cheerleader was anything but typical. And I can totally picture her face scorning those little outfits. And yet my mother was at every opening and every closing of every show I ever did. And she believed in me when I didn’t believe in myself.

My Mum wore a wig to my 21st birthday party. She wasn’t wearing a costume, braving a new look, or trying to make a fashion statement. She was going through chemotherapy - and yet nobody knew.

She fought it, her hair eventually grew back, and we moved on. It was as if it never even happened….

Until it came back. And this time, with a vengeance.

I eventually moved back home to look after her, and felt purpose for the first time in my life. I finally didn’t feel like I wasn’t good enough, wasn’t tall enough, wasn’t skinny enough or blond enough to land the role or get the gig. I was exactly where I needed to be.

And then she passed away.

I used to think in order to honour her legacy I had to live in the world of grief and death and end-of-life. Without my Mum there to cheer me on, I wasn’t brave enough to face life head on. And so, I ran away.

Volunteering at HIV+ orphanages in Thailand to Ashrams in India to vans in New Zealand. And from dreadlocks to shaving my head to raise money for breast cancer. I’ve lived in 16 different countries, volcano boarded in Nicaragua, surfed in Peru, climbed Mt. Kilimanjaro, even bungee jumped in my birthday suit (it was a dare!) And I recently did a Remote Year, living in a new country every month for the course of a year. Now I know what you’re thinking: “Wow, you’ve really lived BIG!” Indeed I certainly lived my own version of Eat, Pray, Love…. And yet I wasn’t living big at all. I was escaping big. I was hiding big.

And then one day I realized I had to do more with my life.

And whether sharing insights on stage, taking women skydiving, or climbing Kilimanjaro, now I get to be the cheerleader my mother was for me to anyone else who’s in need of a little pom pom action.

Apparently when I was 12, after my parents acknowledged they had made a bad call on something, I responded with: “It’s okay, there’s no dress rehearsal for being a parent” (using the theatre analogies already from a young age!)

It’s time to get your BRAVE on.

Here’s why you can trust Carol to deliver...

An authority on brave leadership and founder of The BRĀV Institute, Carol Schulte has been educating, empowering, and entertaining audiences internationally for almost a decade. She is committed to getting you out of your comfort zone and into your BRĀV Zone - where you’re not afraid to show up, speak out, and get into action long before you feel ready.

She holds a BFA in Theatre Performance, an MA in Communication, two postgraduate certificates in coaching and mentoring, and has worked with Fortune 500 companies, international associations, and thousands of leaders to get their brave on. Whether it be asking for a raise or promotion, nailing a presentation, or climbing Africa’s highest peak, her clients attribute her insights and inspiration to them achieving what they never thought possible.

Carol is a published author, has been featured in numerous magazines and podcasts, and is a returning guest expert on Rogers TV. Having lived and worked in 16 countries including Ashrams in India and vans in New Zealand, rocked dreadlocks in Thailand and shaved her head for breast cancer, she certainly walks her talk and brings a global perspective to all she does. When she’s not traveling or speaking on stage, you can find her volunteering as a bereavement facilitator, training for her next triathlon, or practicing her serious carpool karaoke game.

I am beyond thrilled to have had Carol as a keynote speaker for our 2018 national sales conference. Carol had our audience laughing, applauding, and truly feeling inspired by the end of her speech. Her message was refreshingly relevant and was delivered flawlessly with both wit and wisdom. She is an incredibly gifted speaker and a pleasure to work with. I would highly recommend Carol as a keynote speaker – you won’t be disappointed!

I first met Carol as a keynote speaker at ‘Forward Together’, where she truly lit up the room with her presence on stage. I knew I had to invite her in to Amex! Carol ran her workshop to an audience of 200+. She truly captivated the audience who were left feeling energized, entertained, and educated, with tangible take-aways to help them on their own personal journey to living bigger. Feedback captured post session was overwhelmingly positive, I would definitely recommend Carol as a keynote speaker and workshop facilitator.

We were so fortunate to have you speak at our event – you wowed, you inspired, you nudged – you are a true force for good and positive personal change and growth! Consider me an official Carol Schulte fan.

Carol is a fantastic trainer; truly committed to making sure each attendee leaves equipped to go back to their daily lives ready to implement what they’ve learned. She is also amazing to work with from the planning side. She meets deadlines and is always happy to do what she can to make the attendee experience the best it can be!

When I asked Carol to be my opening speaker at my conference last spring, I knew she would deliver and I was confident she would get the day off to an exciting start.  And she more than delivered. She kicked it out the ballpark! With her heartfelt, authentic presentation she nailed how the women in the audience felt and left them feeling they could do more and be more. Carol, you rock. I would recommend you highly to any organization wanting to motivate and inspire their employees, their audience.

Carol has a natural ability to relate to her audience. She is approachable, warm, engaging, and on point with her stories and points. She delivered a very successful closing keynote for the #AdminsRock Conference last spring. The crowd loved her, and she was easy to work with.

Rhonda Scharf | CSP, HoF, CEO of On The Right Track

We were extremely fortunate to have Carol Schulte speak at our recent IAAP Branch Event. Her dynamic speaking style was engaging and the topics she spoke on were very relevant & informative. I was amazed to see her recite the names of all 35 attendees in the room after only meeting each person just 5 minutes prior – and she recalled them throughout the entire day! Carol brings joy and excitement to any room she walks into. I would highly recommend Carol for any upcoming speaking needs you may have!

Carol’s keynote presentation resonated with our team and colleagues which was clearly evident through conversations and interactions long after the meeting. Carol was authentic, personable, and her handouts were tangible and easily implemented to start shifting our lives. I would highly recommend Carol as a keynote speaker or for workshops with your team.

Carol has the unique ability to capture her audience seen only in the most excellent storytellers. She was truly born to be a speaker and motivator. I can't recommend her highly enough."

Carol Schulte is an incredibly talented speaker and personal development trainer who has worked with Women in Biz Network on a regular basis. Carol was our Master of Ceremonies for The Thrive Conference, and captivated the attendees with her insights, quick wit and careful preparation. Carol was especially talented in her ability to connect with the audience, sponsors and speakers presenting at the conference.

Carol’s ability to tell a story is an absolute gift. She joined us remotely at our conference while in South America, and we were able to have her live as the closing keynote at this year’s #PowerfulWomenToday conference. She is a powerful and engaging speaker. It was an absolute joy to have her on our stage!

I had the pleasure of recently working with Carol on DPI’s Professional Development Week.She is a professional!  She was willing to work with us to meet our needs and always responded to my requests for information quickly.

I hired Carol to speak at our Professional Development Workshop this year and was extremely pleased. She was authentic, engaging and willing to share teachable moments in her life. She delivered a fantastic program on a topic everyone could relate to. I would not hesitate to bring her back in the future.

I had the pleasure of being inspired by Carol Schulte at a recent International Women's day event - her words are captivating and she has a unique gift of inspiring women to own their personal power.

Carol’s Schulte’s emcee-ing was a perfect combination of warmth, humility, intelligence, humor and inclusivity. It was all the qualities we were looking for to be the front line for our Thrive Summit Event. Her preparation and research for our event was extraordinary from taking funny photos with our keynote’s book to contacting all the speakers ahead of time. She was receptive to all ideas but also made some great recommendations that made the event run more efficiently and smoother.

She is a true servant leader with grace, hardwork and charisma. I wholeheartedly would recommend her as an emcee for any type of event.

contact Carol to make your next event a huge success

How brave are you? Take this quiz and find out!

Once complete, you'll receive your personalized results, complete with 3 challenges to get into brave action right away!

CLICK HERE TO GET YOUR BRAVE ON & TAKE QUIZ NOW!